Boosting about half of the Gilgit-Baltistan region’s population, the Baltistan division comprises four districts, namely Skardu, Ghanche, Kharmang and Shigar. Also known as “Little Tibet”, the mountainous Baltistan Division connects with rest of GB, and Pakistan, through the 167 km long Skardu-Gilgit highway, built from 1970 to 1982.

Since the early eighties, the road has not been renovated, and it is now in a very poor condition; fatal accidents, landslides, rockfalls and floods, are a routine phenomena. A large number of vehicles, with passengers and goods, have fallen off the road, into the raging, the mighty, Indus River flowing along, in the deep Karakoram gorge. Several dozens of lives are lost in the accidents every year. The incidence of mishaps increases especially during the rainy seasons, when the broken and slippery road, coupled with the hydro-meteorological hazards, wreaks havoc, blocking the road every now and then, leaving hundreds of passengers stranded, in the proximity of vulnerable, shaky, peaks.

Though very dangerous, the Skardu Road is important for defense of the country, being a supply route for border regions, like Kargil, Siachan, Batalik and Courbat, to name a few. Pakistan Army’s soldiers man these border areas round the clock, throughout the year, protecting the motherland.

The road is also important, because it the lifeline for the hundreds of thousands of people in the four districts of Baltistan. Supplies from markets in KP and Punjab, as well as from markets in Gilgit city, go to Baltistan through this region. Its prolonged blockade inevitably leads to shortage of basic necessities of life in the region. Thousands of the region’s residents also travel in an out of Baltistan through this strategic, yet volatile, road.

Prime Minister Nawaz Sharif had announced reconstruction, widening, of the road from Jaglote to Skardu, before the general elections were held in Gilgit-Baltistan in June 2015.

Gilgit-Baltistan, due to its special political status, does not completely fall under the national electoral process and the only elections in the region are held for its regional legislature, the Gilgit-Baltistan Legislative Assembly (GBLA), separate form the general elections held in rest of the country. Widening and reconstruction of the Gilgit-Skard Road was a popular demand, which the Prime Minister promised to ensure. People trusted him, and his party won unprecedented votes in the Gilgit-Baltistan region, playing an important role in establishment of the incumbent government.

It is very unfortunate, however, that still no funds have been released, or allocated, for this strategic project. The people of the region are facing hardship while travelling on this road.

The only flight of Pakistan International Airlines (PIA) operated between Islamabad and Skardu, is weather dependent, and, thus, not reliable. Despite a number of announcements, vis-a-vis making the Skardu airport all-weather, by installing necessary technology, nothing has happened. A number of private airliners also announced starting flights between Skardu and Islamabad, but so far not much has materialized. Even if the airlines start their operations, not everyone would be able to afford the flights.

In a recent statement, Sheikh Hassan Jaffery, an influential cleric from Baltistan, asked for the resignation of all the parliamentarians of GBLA belonging to Baltistan region. He said that they have failed to honor the peoples’ demands, and their own promises, and therefore they should resign.

Another cleric from Baltistan, Molana Arif Hussain, has also protested against the government for their negligence towards the Skardu-Gilgit Road. He went two steps ahead to call it a religious obligation to aware the masses regarding the societal issues, of which the road is considered to be one.

For the first time, the clerics, setting aside their sectarian differences, have united to voice concerns about the public issue. Such is the importance of the road project that has been dragging for decades.

The locals, mindful of the provincial government’s financial constraints, are pinning their hope on the federal government for making the huge budget that a project of this magnitude requires. But, they also fear that with the upcoming elections in 2018, the federal government will lose sight of the project, and it may not see the daylight any time soon. Others are hoping that the project may be included in the 50 billion dollar CPEC initiative. But, so far, apart from rhetoric, nothing is certain, and the locals, as well as an increasingly larger number of tourists, have to hang by the tither, while traveling between Gilgit and Skardu. 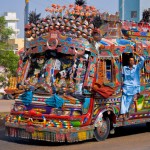