China has funded a study to build an international rail link from the city of Kashgar in the Xinjiang Uygur autonomous region in Western China to Pakistan’s deep-sea Gwadar Port on the Arabian Sea, according to Zhang Chunlin, director of Xinjiang’s regional development and reform commission.

“The 1,800-kilometer China-Pakistan railway is planned to also pass through Pakistan’s capital of Islamabad and Karachi,” Zhang Chunlin said at the two-day International Seminar on the Silk Road Economic Belt in Urumqi, Xinjiang’s capital, according to China Daily. “Although the cost of constructing the railway is expected to be high due to the hostile environment and complicated geographic conditions, the study of the project has already started,” Zhang said. “China and Pakistan will co-fund the railway construction. Building oil and gas pipelines between Gwadar Port and China is also on the agenda,” Zhang added.

In a report last year, China’s State-owned Xinhua News Agency articulated China’s motivation to expand land trade in addition to building its navy to protect its sea trade. Here’s what it said:

“As a global economic power, China has a tremendous number of economic sea lanes to protect. China is justified to develop its military capabilities to safeguard its sovereignty and protect its vast interests around the world.”

The Xinhua report has for the first time shed light on China’s growing concerns with US pivot to Asia which could threaten China’s international trade and its economic lifeline of energy and other natural resources it needs to sustain and grow its economy. This concern has been further reinforced by the following: 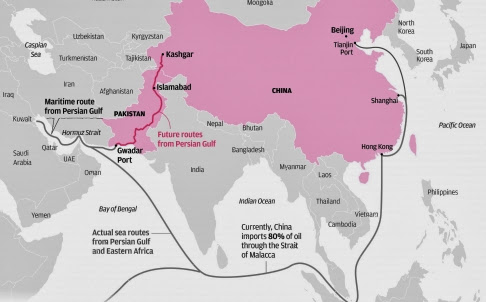 Chinese Premier’s emphasis on “connectivity and maritime sectors” and “China-Pakistan economic corridor project” is mainly driven by their paranoia about the US intentions to “check China’s rise” It is intended to establish greater maritime presence at Gwadar, located close to the strategic Strait of Hormuz, and  to build land routes (motorways, rail links, pipelines)  from the Persian Gulf through Pakistan to Western China. This is China’s insurance to continue trade with West Asia and the Middle East in case of hostilities with the United States and its allies in Asia.

As to the benefits for Pakistanis, expanded trade and the Chinese investment in “connectivity and maritime sectors” and “China-Pakistan economic corridor project” will help build infrastructure, stimulate Pakistan’s economy and create millions of badly needed jobs.

Clearly, China-Pakistan ties have now become much more strategic than the US-Pakistan ties, particularly since 2011 because, as American Journalist Mark Mazzetti of New York Times put it, the  Obama administration’s heavy handed policies “turned Pakistan against the United States”. A similar view is offered by a former State Department official Vali Nasr in his book “The Dispensable Nation”.