ISLAMABAD, Oct 30 (APP): The Co-chairman of Pakistan People’s Party Asif Ali Zardari Friday appointed the labour leader Ch. Manzoor Ahmad as an In-charge of the election of Gilgit Baltistan (GB) to be held on November 12 of this year.Ch. Manzoor, the former MNA and an active member of PPP’ Central Executive Committee left for Gilgit Baltistan today morning. He will particularly pay attention to the party’s activities, to resolve the problems of PPP’s 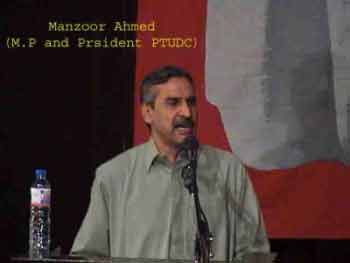 candidates busy in election campaign. He will also visit different constituencies of the province to contact masses following the launching of smooth campaign.

He will present the detailed report on daily basis to the Co-chairman about party’s activities, its position and suggestions for the improvements in party’s structural organization in the province.

President of Gilgit Baltistan Chapter, Mehdi Shah has welcomed the appointment of PPP’ stalwart as an In-charge of the election, expecting to further increase the morale of the party during the campaign.